The World Health Organization declares that Antimicrobial Resistance (AMR) occurs when bacteria, viruses, fungi and parasites change over time and no longer respond to medicines making infections harder to treat and increasing the risk of disease spread, severe illness and death. This, in other words, implies that Antibiotics are becoming ineffective as drug-resistance spreads globally. As a result, this problem appears to have implications on the economy of different countries.

AMR is caused by many dynamics, but the most common ones, as explained by the WHO, include: the misuse and overuse of antimicrobials; lack of access to clean water, sanitation and hygiene (WASH) for both humans and animals; poor infection and disease prevention and control in health-care facilities and farms; poor access to quality, affordable medicines, vaccines and diagnostics; lack of awareness and knowledge; and lack of enforcement of legislation. Globally, many studies have been conducted to show the scale and magnitude of problems caused by AMR. In that regard, the first comprehensive study published on The Lancet estimated that resistance itself caused 1.27 million deaths in 2019, and that antimicrobial-resistant infections played a role in 4.95 million deaths.

Recently, a study has been conducted by the National Data Management Centre for Health, at the Ethiopian Public Health Institute, aiming to address the evidence gap on under-five mortality due to Antimicrobial-resistant (AMR) bacteria. In technical senses, the study used data from Child Health and Mortality Prevention Surveillance (CHAMPS) and Study of Illness in Preterm (SIP).

The findings of this study revealed some major findings. First, the two prevalent pathogens (K. pneumoniae and E. coli) are fully susceptible for Amikacin. For the rest antimicrobials, the resistance of K. pneumoniae isolates ranged from 9.6% (Ciprofloxacin) to 100% (Penicillin) and >90% resistance to Ceftriaxone, Clynamicine, Ampicillin, Erythromycin and Gentamicin. Besides, the resistance of E. coli isolates ranged from 18.2% (Ciprofloxacin) to 100% (Clynamicine) with moderate to Amoxicillin-Clavuanate (25.9%), Gentamicin (29.6%) and Ceftriaxone (48.2%) while >60% for the rest of antimicrobials.

The second major finding of the study shows that out of the 10 antimicrobials tested, Amikacin and Ciprofloxacin had efficacy levels of 87.0% and 75.4% against all isolates (n=161) in under-5 deaths, respectively. The rest had efficacy levels less than 37% with the lowest (11.9%) by penicillin. 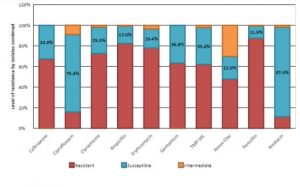 Figure: Efficacy levels of antimicrobials in under-five deaths in Haramaya, Harar and Kersa HDSS, Ethiopia, 2019 to 2021

As a final note the study concludes the following points. First, Klebsiella pneumonia is the predominant cause of sepsis and pneumonia in child deaths followed by vaccine preventable, Enterobacteriace and staphylococcus bacteria groups. Second, the pathogens frequently used to treat sepsis and pneumonia are extensively resistant to the antimicrobials in Ethiopia (ceftriaxone, Augmentin and Gentamycin among others). Third, the pathogens’ greatest levels of antibiotic resistance indicate that the healthcare systems in many parts of Ethiopia are running out of antimicrobial choices to treat life-threatening childhood infections.

Hence, it has been highly applauded by the researcher that the health care system should consider AMR surveillance of key pathogens as part of infection prevention mechanism in healthcare settings, and manage ways to look for antimicrobial options.